The Soulful Black Bean Soup That Reminds Me Of Home

Even though I don’t live in Los Angeles anymore, I feel so lucky to have been born and raised there. My hometown takes a lot of shit. To non-natives, Angelenos can come across as clout chasing, vapid, bougie AF, plastic surgeon designed robots. But the truth is, the city that raised me has a lot of heart, some of the kindest people you’ll ever meet and one of the most culturally diverse dining destinations around.

Growing up, I took for granted how normal it was to have an abundance of different cuisines at my fingertips. It was nothing to just hop in my car and, depending on traffic, pull up to a restaurant in San Gabriel Valley for authentic dim sum or even a succulent roasted duck served with sizzling scallion pancakes and plum-sweet hoisin dipping sauce.

Another 30 minute drive east would drop me in Southern Central, near USC’s campus, where Mexican food reigns supreme. Every native has a favorite taco spot and mine is located right off of Vernon Ave in a forgettable parking lot. Pulling up to Tacos Los Carnales is an almost religious experience for me.

The light from the truck in the late night hour casts a hazy glow over the women working quickly with their hands to shape simple masa dough into the sponges that soaked up all of the salty goodness of  whatever meat I’ve ordered (usually carnitas are carne asada). Here $5 bucks gets you three tacos and an horchata to combat the spiciness in the salsa roja which you could of course skip, but why?

Want more? 45 minutes up north will land you back in the San Fernando Valley, where my parents still live for all the fresh sushi you can fit into your mouth. Here it’s not uncommon for some of the best sushi chefs around to sling their fare out of broken down strip malls. In other cities, grabbing raw fish next door to a massage parlour would almost guarantee you a trip to the emergency room (or your toilet) for a bout of food poisoning. But not in my city.

So much of the way I cook in my own kitchen is influenced by the cuisines that I consumed regularly  growing up—South East Asian, Mexican and Black Southern food. At any given moment I’m pulling from flavors, ingredients or recipes from those cultures and combining them to make something of my own making.

Open up my cabinets and you'll find dried chilis, dusty jars of salsa ranchera and cans of chipotle in adobo sauce sitting snuggly next to packets of dried nori, funky smelling fish sauce and glass bottles of fermented shrimp paste. These are the ingredients I use to make magic over bubbling cauldrons and roasting pans.

Which leads me to this deliciously savory Black Bean Soup with Smoked Ham Hocks. Black bean soup has a rich history within Latinx cultures and well, ham hocks have flavored stocks, braises and other dishes in African American cuisine for ages.

Together, these two simple ingredients meld together to create a rich, hearty meal that is both flavorful and deeply nourishing.

I like to top my soup with a drizzle of Mexican Crema. Not quite a sour cream, this condiment is more mild and helps to create a velvety texture.

I love to serve this soup in deep bowls topped with mounds of shredded smoked ham hock meat, freshly chopped cilantro, diced red onions and a drizzle of crema but you feel free to do whatever you think will make this meal delicious to you.

If you don’t have an immersion blender, you can blend your beans in a regular blender in batches. Be careful to wait until the soup is cool to avoid hot explosions on your ceiling and kitchen counters!

Pro Tip: This soup can last up to 5 days in the fridge when stored properly and up to six months in the freezer.

I’ve tried my best to answer any questions you might have below but if you have anymore leave me a comment or hit me up on Instagram.

Can I use canned beans for this recipe?

You totally can. I happened to have a bag of black beans that I absolutely needed to get rid of so I used them here. If you have cans of black beans you can make this recipe even quicker and it will be just as delicious.

If you use canned black beans, be sure to drain and rinse them before adding them to this recipe. While you won’t have to cook these beans as long, you still want them full of the flavor of the soup. That means you’ll likely simmer them for around 45 minutes to an hour. After they’re nice and soft, proceed with the recipe as normal.

Can I just do this in an Instant Pot/Slow Cooker?

Yup. If you’re cooking this recipe in an Instant Pot you should still soak the black beans for about two hours in hot water. Afterwards, drain the liquid from the beans then add everything (including the ham hocks) to the Instant Pot along with 5 cups of water. Select the pressure cook function and cook on high for 1 hour.

After it’s done, allow the pressure to naturally decrease and then remove the ham hocks and proceed with the recipe as written.

In the slow cooker: Just add everything to your slow cooker along with 6 cups of water and cook on the high function for 6 hours. Afterwards, remove the ham hocks and proceed with the recipe as written.

I don’t have poblano peppers, what else can I use?

If you don’t have poblano peppers at home and can’t find any in the grocery store you can substitute for green, red or yellow bell peppers.

Do I have to use red onion?

Nope. It’s your world. Use whatever kind of onions you want! 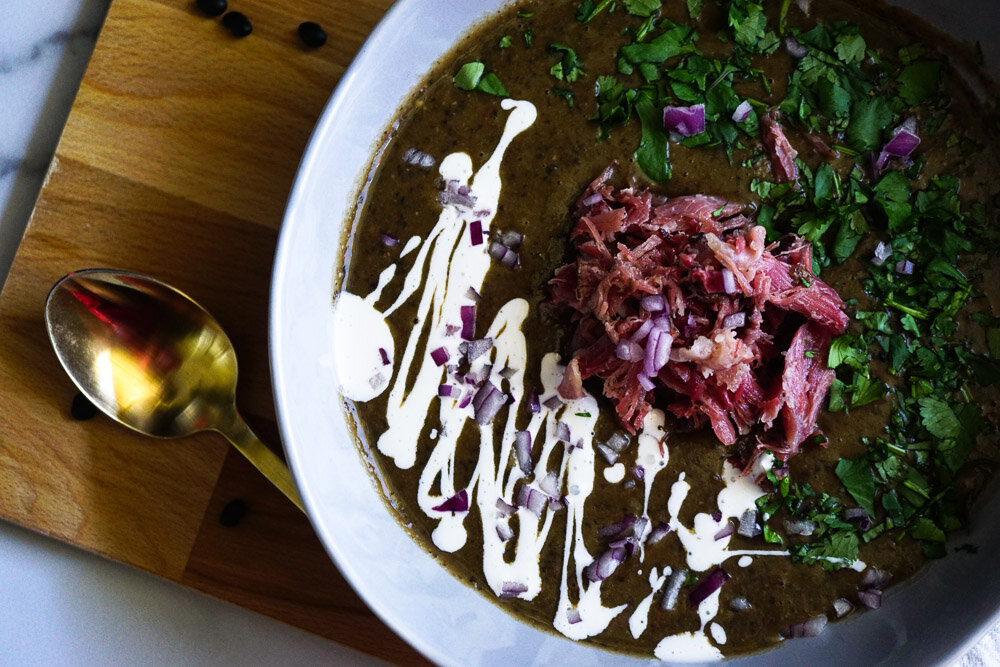 For the soup
Garnish

Did you make this recipe?

Trust me, this is the only burger recipe you'll ever need.
Ryan Shepard
Read More
BS+B Recipes

These tender oven-baked ribs are sure to be a mainstay on your dinner table.
Ryan Shepard
Read More
BS+B Recipes

The Only Pork Chop Dish I Ever Serve My Dinner Guests

Sticking to one dish you know how to make really well is the key to success here. For me that one dish is blackened pork chops in a sage brown butter sauce.
Ryan Shepard
@brownsugarandbourbon